All sorts of documents and artefacts exist in the Sylvia Plath archives; handwritten and typed manuscripts, novel drafts, personal items, clothing, drawings and sketches, furniture, music books, student notes, and journals. One particular type of archival item that is often overlooked is the photograph. Perhaps this is because studying somebody’s portrait invites a completely different type of gaze and provides a different type of knowledge. It is unlikely to reveal anything about Sylvia Plath’s development as a writer. Yet images can be – and are – active in the social process of understanding Plath in her broader historical moment and can act as visual shortcuts to understanding her cultural context.

Sometimes it can be the accidental details – fashion, location, and purpose of the image that reveal essential information. For a second we visually enter her social and cultural world and inhabit her having-been-there-ness. For this reason, I tend to ‘read’ portraits as fairly important documents, partly because they can offer us what Roland Barthes calls ‘historical grammar’ but also his belief that iconography is cultural. In other words, when Barthes explored how meaning gets into an image, he concluded that objects are often used as accepted inducers which promote an association of ideas. When I first encountered this argument from Barthes I struggled to grasp what he meant and how it linked to cultural knowledge. He believed that objects, or the posing of objects in a photograph, do not possess power, but rather possess meaning.

Using this as a theoretical framework to read portraits of Plath in the archives uncovered a new way of understanding her. And the first time I truly understood Barthes’ idea was when I saw the portrait of Plath and Hughes taken by David Bailey for Vogue magazine in 1961. 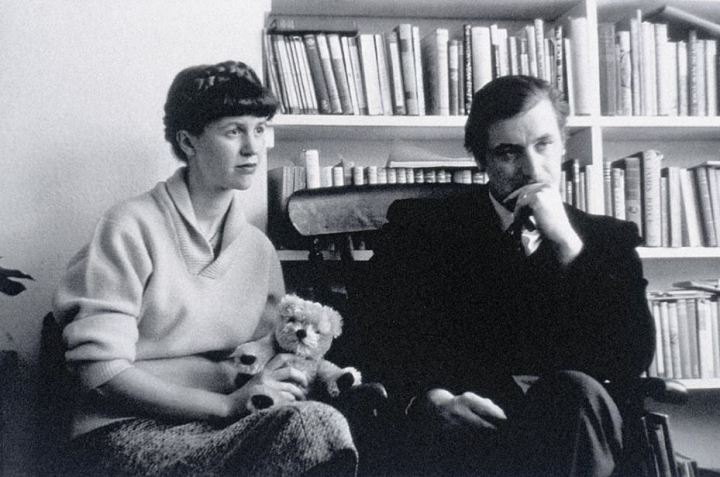 This shot was taken inside their flat at 3 Chalcot Square, Primrose Hill. They are sitting side by side and behind Hughes is a bookcase (association of bookcase = intellectual, says Barthes). But then interestingly, Hughes is sitting holding a book in his lap (successful writer association) and Plath is holding…a teddy bear. How do we read the accepted inducers here? By this time Plath was a mother, but she was also a successful writer. Did motherhood somehow visually take over? Joint portraits taken of Plath and Hughes in Boston a couple of years earlier tell a different story – both are presented with books, papers.

How do we read a photograph? According to Barthes ‘it depends on the reader’s knowledge just as though it were a matter of real language [langue], intelligible only if one has learned the signs.’ Of course we bring our own imagination, our own personal context to the reading of an image but equally captured within the four sides of a frame is a frozen moment – melancholic by its very preservation, and by implication, its inevitable passing away. Perhaps we respond to the accepted inducers and create our own association of ideas? And surely the purpose of the photograph is crucial – is it professional or personal? I am not sure I have answers to these questions, yet I do believe that the photograph is a powerful archival document.

In the same way a handwritten poetry manuscript with ink stains and smears and coffee cup circles allows Plath’s traces to flare out of an archive folder, so too does a portrait. The immediacy of the visual is perfectly described by Barthes; ‘A sort of umbilical cord links the body of the photographed thing to my gaze…’ Ultimately, this can be poignant but often, like all other archival artefacts, it can be about re-animation, the bringing back of the having-been.

‘Cameras in short were clocks for seeing…For me the noise of time is not sad.’ (Barthes)