I do not trust the spirit. It escapes like steam

In dreams, through mouth-hole or eye-hole. I can’t stop it.

One day it won’t come back. Things aren’t like that.

They stay, their little particular lustres

Warmed by much handling. They almost purr.

‘Things’ can have all sorts of different values: financial, cultural, usage, social, personal. Sometimes the most fascinating items in a literary archive are personal possessions and things. Not because they can necessarily tell us about creative output or how a poem was formed or a novel conceived, but because they place the writer in a particular moment, surrounded by a particular set of personal possessions. At Smith College, we can see the final manuscript of Ariel which Plath left in her Fitzroy Road flat, London, at the time of her death. But we can also see hanging on the wall in the archive there, the large elm plank desk upon which she wrote Ariel; the desk that held her pile of manuscripts and her pens and pencils in a pale blue Victorian Jubilee mug inscribed with the year 1897. The desk tells its own story – rescued from its original purpose to form the lid of a coffin, it was sanded smooth by Ted Hughes and Warren Plath in September 1961 to become Plath’s large writing table, kept in her study at Court Green, Devon. After her death, the table was moved to the kitchen and then sold to Smith College in 1984. Things have stories too.

Walking into the preview room at Bonhams, London last month the day before the large sale of Plath and Hughes items, meant walking into a room teeming with stories. They were all there jostling to be told. The large red rug, much sought after, with shops in London and Exeter and Plymouth scoured until Plath found the right one she wanted for her living room. Her ecstatic delight when it covered the ‘dirty-ish’ floorboards keeping out the grim cold of a Devon winter. 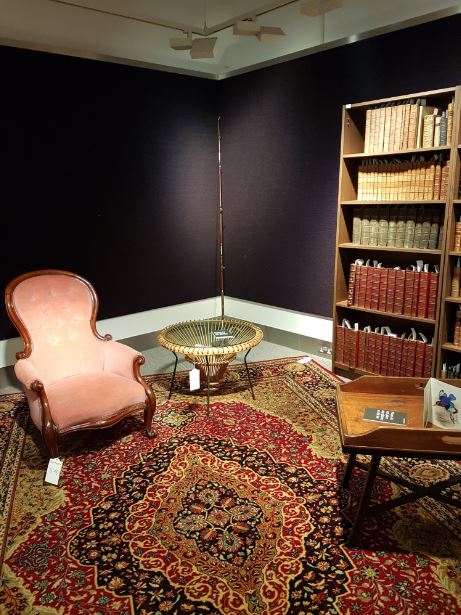 The blue satin top she wore for dinner sailing across the Atlantic back to England in 1959 when she was pregnant and seasick, featuring again in her journals on New Year’s Eve in 1961 meeting her new neighbours in Devon for the first time. Her proof copy of The Bell Jar that arrived during the grim autumn months when she was living alone in Devon, but wrote to her brother that it made her laugh, and that was no small thing given how awful she was feeling. 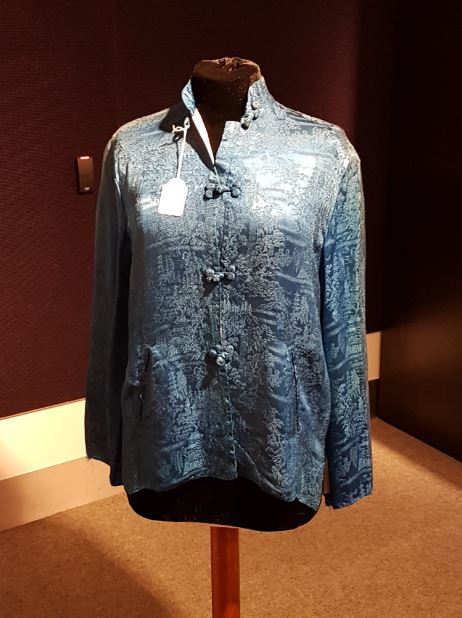 Her personal copy of The Bell Jar inscribed with her final London address and a dark inky star to indicate its importance. Her watches that we see glinting out from photographs over the years that she wore on her wrist at Smith, or drinking cocktails in New York City. Her dragon pendant that appears in so many photographs taken in Boston and London that looks quite heavy and substantial, but is actually quite light and flimsy. Her green typewriter, each key creating The Bell Jar. 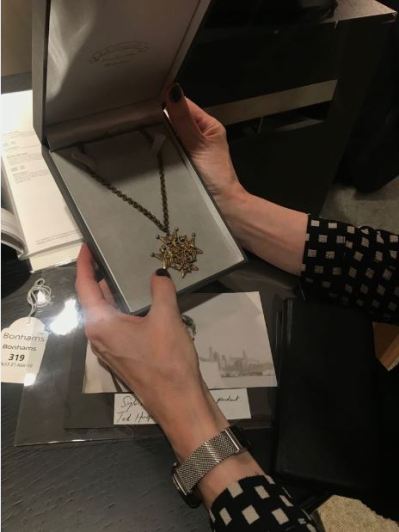 The chairs she sat on, the earrings she wore, the dull glint of a copper hair band, and the poignancy of an auction lot containing a missing earring. Manuscripts, books, wallets, a driving license, an underlined thesaurus, and an annotated cookery book. The lares and penates of Plath’s life, as she called them. Each item a cultural phenomenon in its own right, owning its biography from having been handled and used by her.

Stories from the past leap into the present, particular lusters, all together for one last time. The traces and imprints somehow filling a physical absence. And the stories continue as these things move to new owners, new biographies – will they be used? Stored? Sold on? What will happen to them now? Will they accumulate new histories? What will their future stories be?