One feature I love about archives is their maddening elusivity; for while they are a source of knowledge, equally they leave gaps and silences. For me this is part of their appeal and why they can ignite a researcher’s imagination. A missing letter or manuscript can lead to years of sleuthing and searching. Information deliberately removed, leads to speculation and suspicion.

These silences can be contained within a document already held in an archive. For example, Plath’s 1962 Letts Calendar in Smith College archives is a rich source of information. But there are two pages missing, deliberately torn out. The first is the September week that Plath spent in Ireland with the poet Richard Murphy. The second is the October week Ted Hughes returned to Court Green to pack his things and leave permanently. If you examine the calendar carefully you can see, on the pages that are left beneath these missing weeks, quite aggressive strike-throughs, though what is being struck through is not visible. Did Plath remove these pages, or somebody else? Why? Likely we will never know.

Other less dramatic untold stories can emerge unexpectedly while working through material. One of my favourites is the preserved, pressed rose petal against a Smith College envelope. It is almost hearted-shaped and has darkened and dried to a deep reddish-black over the years.  What is the significance of this? Why did Plath keep it? 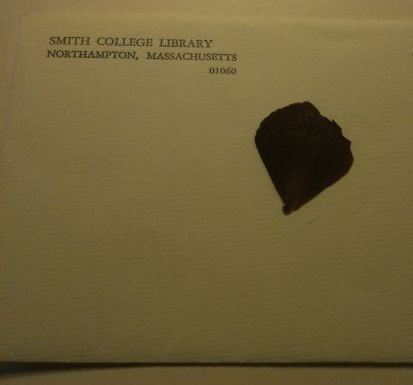 Or the smudge of lipstick on the corner of a gift from Seventeen magazine. While the card remains in pristine condition, did Plath accidentally smear her lipstick one day? Or is this a later addition by a clumsy researcher? Or her mother? Exactly whose traces are we looking at here? Elizabeth Hallam and Jenny Hockey believe that material objects which persist beyond biological death can destabilise object/subject boundaries; “material objects can become extensions of the body and therefore of personhood.” It is perhaps especially spectral when a subject imposes itself on a object in this fashion leaving a visible, tangible trace.

Likewise, the back of an envelope in Lilly Library has two full lipstick imprints over instructions written in Aurelia Schober Plath’s handwriting on how to find her daughter who had been admitted to Massachusetts General Hospital in August 1953 following a suicide attempt. An odd juxtaposition. Which came first, the lipstick or the writing? We do not know who these lip imprints belong to, or when/why the envelope was used as a sort of cosmetic blotting paper. Bearing traces of the past, the envelope offers its forgotten history.

Many of these moments surface in the archives; from a file, from an envelope, or the ragged remnants of a torn-out page. All of the untold stories, big and little, important and insignificant, offer up their mysteries. And this is the power of archives; the stories waiting to be told, and the stories that will remain untold.